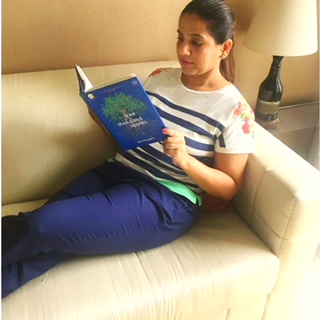 Book: The Tree with a Thousand Apples

I’m sure that numerous reviews have been written on this book. Still I would like to share my take on it. The views shared in this post are mine alone and I’m sure that there will be many differing views on it.

The story is about 3 childhood friends, Deewan, Safeena and Bilal and is told in a series of flash backs. The story is based mainly in Mumbai and Kashmir and is set in the late eighties and nineties when terrorism in Kashmir was at its peak.

For me certainly and perhaps for the rest of us residing in other parts of India, the problems going on in Kashmir seemed to be a remote issue. This book deals with the problems faced by the people of Kashmir in depth and shows how mitigating circumstances can turn ordinary people into both villains and heroes. How the army and the army personnel acted as both saviours and oppressors in Kashmir is also portrayed here.

The title of the book, the tree with a thousand apples, grows in Deewan’s backyard and is shown to be a symbolic gesture. I learned the names of many Kashmiri dishes like firun, kahwa and rogan josh from this book.

The story begins in January 2012 with Safeena and Bilal having a rendezvous in Lohagad, Maharashtra. This rendezvous is not for old time’s sake, but for carrying out a daring rescue operation with the aid of Molotov cocktails, which is successfully executed like a Bollywood action sequence! The object of their rescue turns out to be none other than Deewan.

Thereafter the story is told in a series of flashbacks starting from November 1989 when Deewan is 11 years old. Safeena is revealed to be his neighbour and Bilal is their common friend. Several incidents are narrated depicting the camaraderie between the three children.

Bilal, a Muslim, hero-worships Deewan, a Pandit, as Deewan stands up for Bilal and even gets beaten up for him by Anwar, a bully, who goes on to play a major role in the story. Safeena, also a Muslim, is described as a beauty with fair, glowing skin and green eyes.

Deewan’s brother Ravi is in the Army. On a visit with Ravi to the army headquarters in Srinagar, Deewan is introduced to Ravi’s CO, Major Choudhary, described as having an abnormally large Adam’s apple. Major Choudhary also goes on to play a major role in the story.

Things come to a head on the night of Bilal’s 11th birthday. While Bilal is waiting for Safeena to come to bake him a chocolate cake and for Deewan to come to wish him, Ravi is killed in an attack on the army barracks. That same night an angry mob attacks Deewan’s house but Deewan and his family are spared as they have been given shelter by Safeena’s family.

That same night, Safeena’s family is paid a visit by two men who seem to be militants. They suspect that Malik Chacha, Safeena’s father is harbouring the Bhats, i.e. Deewan’s family. They are interrupted by Major Choudhary and two of his soldiers, who are also looking for the Bhats, in order to inform them about Ravi’s death. There is a shootout between the soldiers and the militants in which the militants, two soldiers and Safeena’s mother Saira are killed. This shootout is also in the style of a Bollywood action sequence. In the aftermath, the Bhats hire a taxi and depart from Srinagar for good.

The story moves forward to September 1995 where Safeena is trying on a pair of jeans owned by Bilal’s sister. There is a routine check conducted by the army which turns out to be disastrous as it leads to the death of Bilal’s sister Rehana and takes Bilal to Anwar and the path of terrorism.

When Bilal is on this path, he is responsible for the death of Malik Chacha, Safeena’s father. For his crime, he is imprisoned in Papa-II, a dreaded prison in Srinagar. He undergoes various types of interrogations at the hands of the army. Safeena on the other hand, is helping Bilal’s mother who is seriously ill in trying to find out what happened to Rehana. Bilal is shown to be out of prison and comes to Safeena and confesses to her about his role in her father’s death.

The story takes another leap forward to April 2010 where Tariq, Safeena’s brother, while working as a porter is unnecessarily gunned down by the army soldiers on the command of Choudhary, who is now a Major General. Deewan is now living in Mumbai and is working as a journalist who also writes poetry. It is narrated that he lost his left hand and his mother, the night that they fled from Srinagar. He receives an email from Bilal seeking his help as Safeena is missing.

This leads to Deewan rushing to Srinagar. He arranges a meeting with General Choudhary where he finds Safeena herself working in the General’s home. He rescues her from there late at night, as she was being exploited by the General. He brings her back to Mumbai and settles her in his own home.

Safeena leaves Deewan’s home as her presence is not accepted by Deewan’s grandmother Babhi. She meets a man called Ayub in the mosque and moves into his home. It is then Safeena also starts walking on the same path as Bilal, i.e. the path of terrorism.

I would not like to give away the finale of the book, though I have already given away so much! But I can state that ultimately it’s a story of friendship, love and sacrifice. Deewan is ready to sacrifice his life for Safeena and Bilal in turn for Deewan.

All in all, The Tree with a Thousand Apples is worth a read!